3 Great reasons to buy from us: Why Buy From Us

Here are some great reasons to buy from us:

This product worked for us! My son last year picked up developed these bumps all over his The doctor said that he had picked up a virus similar to the common wart (but i forget the exact name.) Because his hands at the time had become very dry and cracked, it spread like crazy rather than being isolated to one or two. So what could we do? There were way too many for the doctor to freeze them, it would scar up his hand and be very painful. So the doctor advised us to wait and they would eventually go away on their own. How long could we expect it to take? Probably a within a few YEARS! But these bumps were quite visible and embarrassing to him. So after about six months of no change (this photo is day one of the treatment) I went on a mission to try and speed along the process.

I'm going to give a little detail here of the process before i got to these, just in case any of these made an impact with the product.

First, I tried some wart remover. It hurt too much to do it regularly enough to make a difference.
Next, I tried apple cider vinegar. This also hurt a lot, and I realized it would dry out his skin, and part of our plan was to keep the skin hydrated to minimize further spreading.
Finally, I read about Hwart. I was very skeptical, to be honest. I read the reviews first and noted that it looked like it worked about 50% of the time and 50% of the people thought it was useless. Now, if i believed that the 50% positive were all real, that would be about what i'd expect from any home wart treatment, about a 50% chance it would work. But I'm wary of false reviews on health products, so I was still skeptical. When I realized that the company offered a ninety day money back guarantee, I thought: What do we have to lose? If it works, it's worth every penny. If it doesn't, I can return it for a refund.

So I got my product and we only used it once a day at night and alternated it with coconut oil in the day to help with healing and moisture. Well!! In about 2 weeks they were almost gone, 3 weeks and his hands looks totally normal!! That's 3 weeks instead of YEARS.

Oh- and it didn't even sting at ALL! 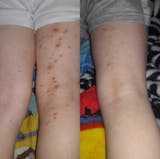 V
V.
It Really Works - Be Patient and Consistent

I rarely ever leave reviews but based on the number of negative reviews I had to leave one. This stuff really works if you are patient and consistent. I had a large wart on my scalp and face that was originally scraped off by a dermatologist. Well after a year or so it grew back with a vengeance. I shave my head almost bald and I was having self esteem issues because of the large wart that had doubled or tripled in size after the dermatologist scraped it off. I read so many negative reviews that I was skeptical this stuff would work. It has a strong smell but it's not completely hideous like some mentioned before. It smells like a mixture of eucalyptus and tea tree oil.

Now, to the fun part, I started putting this oil on the wart religiously 4 to 5 times a day. At first it started to get worst and what seemed to me as getting larger. After 5 weeks of religiously putting it on 4 to 5 times a day today the wart is almost completely gone!! I'm super excited that this product really worked.

I would like to add that my review is not fake and I was not given the product for free or paid on the side to leave this review. I purchased the product on May 7th and today is June 13th. I will post photos as soon as my wife sends them to me as she has taken before and after pics for me to share. I hope this review helps anyone that is on the fence about buying this product.

Remember, stay consistent and diligent...you will not be disappointed! 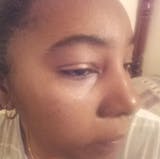 J
J.
... cream for 3 weeks with no real results and terrible side effects

Used pharmaceutical immiquod cream for 3 weeks with no real results and terrible side effects. (My skin and flesh was literally festering and breaking apart)

After 1.5 weeks using this product I've seen significant improvement and the only thing I've had to deal with is its eucalyptus smell - which I find to be great. 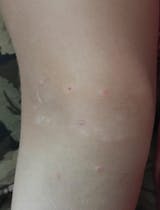 My teenage son has had warts all over both his hands and arms and even under his fingernanils for years. We spent hundreds of dollars at the dermatologist over a year and a half and he tried several methods. Nothing worked. Just when we thought they were getting better the warts would be back even stronger.

He had hundreds of huge, stubborn warts, especially on his hands (I wish I had a 'before' picture). Desperate to try something else, I got online and came across this product. Many stories sounded like ours so I thought with a money back guarrantee, what do we have to lose? Skeptical, I marked "Day 1" on the calendar ready to collect my 90 day money back guarrantee. It took a good 3-4 weeks before we saw significant progress but we kept applying it faithfully. (Don't give up!) He has been using it about 2 1/2 months now and most of the warts are GONE! The most stubborn ones are slowly fading and disappearing as well...out of the hundreds, there's maybe only a dozen or so still slightly there and receeding every day. We are so excited about how well this worked. My other son has a couple dozen warts and has been using it as well. It's taking longer for his to go away but I don't think he was putting the oil on heavily enough. My daughter has some little warts on her knees that she's used it on and they are disappearing much faster than either of her brothers' did...like after a week some are gone!

I absolutely recommend this product...especially if you've tried everything and nothing has worked. It's expenisive, but a large bottle is cheaper than my copay at the dermatoligist! One 33mL bottle ought to take care of a fair amount of warts. Since we were dealing with hundreds of large warts and three teens, we are on our second bottle now...hopefully that will be it and we will be wart-free soon!

I was skeptical at first. But within a few days I applied the oil to my son's face, warts started to dry and fall off! Even my child was so smazed! Not only it was completely painless (just a warm sensation and herbal smell that I actually started to like) but it also left no scar at all. Where there used to be warts now lies a tiny shrunken dry scab which is not really noticeable. I am still working on a few remaining ones on his face and I have faith they will all go away soon. In my opinion, it seems that newly formed warts die faster than the old, persistent ones. I would highly recommend this product to anyone. I am getting another bottle soon. Don't Take Our Word For it! Here's What Our Customers Think: